My aim for the woshibo sprint (kde-telepathy sprint) is to get something going for audio/video calls in kde-telepathy.
The sprint started off well. We discussed a lot about how the project is to evolve and sorted out the problems we currently have 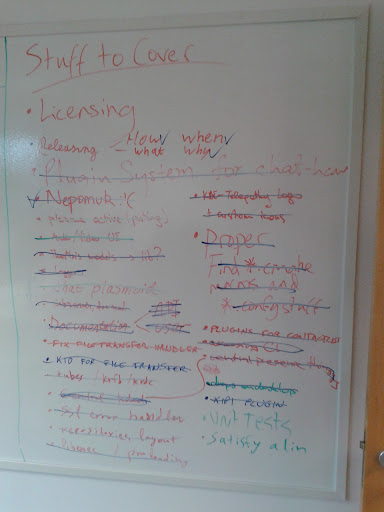 This afternoon I was depressed because I was having problems on my pc that NOBODY else was but in the end I managed to sort things out after bugging a Collabora guy and George K. (which I thank for not having killed
me for asking him 1.000.000 questions).
So in the end I managed to call George K on his n900 with my pc and listen to him speak 🙂
So that’s a +1 for kde-tp!

Just to let you guys know what’s currently going on:

So as you see, we’re all quite busy here.
Stay tuned for more news on the Woshibo sprint!